The 8 Best Theme Bars in Colorado! 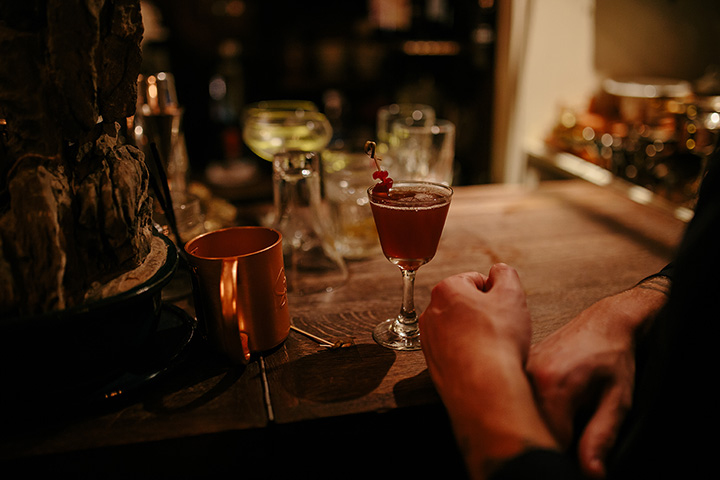 On the hunt for a local watering hole that’s more than just a place to have a drink? These Colorado bars have character, history, ambience and are the perfect place to hang out with friends. From historic saloons to cozy speakeasies, here are the 8 Best Theme bars in the state.

Having an Antler Ale, the signature beer, at this out-of-the-way saloon is a definitive Colorado experience. The bar’s century old pine buildings tucked away close to the Arapaho National Forest are downright hard to find, but worth the effort whether you drive, hike or bike. Authentic antler taps, thousands of dollar bills covering the walls and a rustic, ramshackle ambience captures the character of a historic, old-west saloon.

The setting at this 40-year-old bar has been described as “popular pandemonium.” Swagger through the old-time swinging saloon doors right into this rowdy bar with memorabilia on the walls that visitors from around the world have left. It’s known for legendary live music, generous mixed drinks and cold beer. It has quite a history as a dance hall, church and drugstore, but it really has hit its stride as a mountain bar.

Belly-up to the bar at this, the second oldest saloon in Colorado, for a shot of whiskey much like the notorious gambler Doc Holliday might have requested. The history inside and out is literally touchable from the original tile floor to the custom made oak bar that still has the original diamond dust mirrors to the historic photos and memorabilia scattered throughout. Spend some time absorbing the storied past with a cold beer or a glass of wine.

Known as gonzo journalist Hunter S. Thompson’s favorite bar, fans and devotees of his writings come from around the world to hang out where he did. It’s every bit as odd, curious, outlandish and eccentric as he was. The walls are covered in photos, magazine covers, newspaper clippings and pictures of the infamous author. The bar serves local beers on tap, plus a variety of popular labels by the bottle as well as a small selection of wine. Don’t leave without trying the specialty of the house, a fresh squeezed lime margarita that’ll knock your socks off.

The I Up Arcade Bar Colfax, Denver, CO

Game on! That’s the rallying cry at this bar that boasts more than 90 classic arcade games, dozens of pinball machines, six lanes of classic Skee-Ball and a couple of Giant Jenga games, making it, purportedly, the largest arcade bar in the country. With a dozen beers on tap, classic beers in vintage cans, bottles of malt liquor and a full bar, an evening here is a night of entertainment and good cheer.

This is a 21st century version of your grandfather, or grandmother’s, bar. Classic drinks like Manhattans, Old Fashioneds and Sidecars are featured, made with spirits solely produced by their own Golden Moon Distillery. All of the cocktails are meticulously made with hand-crafted liquors and liqueurs, paying homage to the golden age of cocktails of the 1930s. Flights available for those who want a splash of a few.

The giant bar, built in the 1880s, dominates one entire wall of this bar, the second oldest in the state. At one time, Front Street had 13 bars scattered from one end to the other. This, the last remaining one, is a historic landmark. The bar list is a who’s who of craft cocktails that includes martinis, Manhattans and a signature Old School Old Fashioned made from an original recipe from the 1880s. Beer on tap and in the can and sparkling, white and red wines pair well with the steakhouse-style fare.

One hundred beers on tap, all in line against one wall is an awe-inspiring site. If you can’t find something you like … well, that would be surprising. And there’s more. Local and international beer by the bottle, wines by the glass, crafted cocktails, specialty scotch and whiskey and well liquors complete this, clearly, well-rounded bar. Choose a flight of four beers … in 25 days you’ll have tried them all.

View more Colorado Bars and Saloons.
Select a Colorado town to find
the Best Things-To-Do and Places To Go around you